I created a clickable prototype of my concept by first wireframing and then mocking up the screens in Adobe Illustrator. The prototype was strung together using Adobe XD. 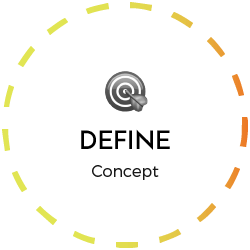 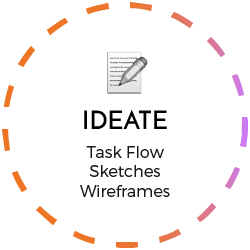 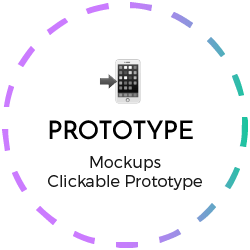 The subject of time travel has fascinated me for quite some time. I love entertaining the idea, so I was naturally drawn to the challenge of conceptualizing and designing an app for time travelers (if time travel were possible). There are plenty of problems and paradoxes to consider, making it an interesting project to explore.

To develop, even a fake app, you have to consider the mechanics. What will be the limiting factors and how will paradoxes be dealt with? For this, I take some inspiration from popular books and movies that depict time travel. We don't actually know how time travel would work, so artists have widely varying, but imaginative, ideas.


In the Doctor Who series, time travel is achieved with the TARDIS (Time And Relative Dimension In Space), a semi-sentient aircraft that can transport passengers anywhere in space and time, and also camouflage itself to look like anything. The mechanics of time travel is not explained outright in the series, however a quote from one of the episodes suggests multiverse theory: "Whatever happens here will create its own timeline, its own reality, a temporal tipping point. The future revolves around you, here, now, so do good!” Only one limitation is made quite clear: do not interact with a past self.

In Harry Potter and the Prisoner of Azkaban, a time-turner necklace is placed around individuals who would like to travel back in time. Each turn of the hourglass results in traveling one hour back in time at the place of departure. Time related magic is considered highly unstable and therefore stringently regulated. "The longest period that can be travelled back in time without serious chance of harm to the traveller or time itself is around five hours." Changes made when traveling back in time affect the future and it is also important that the traveler not interact with their past self.

In the movie Click, a "universal" remote control can be used to pause, rewind, fast–forward and even skip "chapters" of time. When the traveler's consciousness fast–forwards or skips, the traveler's body is on "autopilot". The traveler can go to a "menu" and choose a past memory to go back to. However, the past cannot be altered and is only available as a memory that can be viewed in 3rd person, like a ghost.

In the Guardians Trilogy, time travel is achieved through the use of a compass that is passed down from generation to generation. Only the person who it belongs to can initiate travel. This individual thinks of the destination time period, as well as the coordinates to travel. The traveler has to be very careful of the intended physical destination as travel too far into the past or the future is unstable. The compass always accompanies the traveler, and others can be brought along for the ride.


The Rules of the Game

Originally, I was conceptualizing an app where the past could be altered by travelers. After talking with a couple friends, however, I decided against it. Although being able to change the past makes for compelling movies and books, most people were convinced having the ability to easily alter the past would actually be a really bad thing. We are definitely not ready for that type of power. It also introduces paradoxes that we have yet to understand. 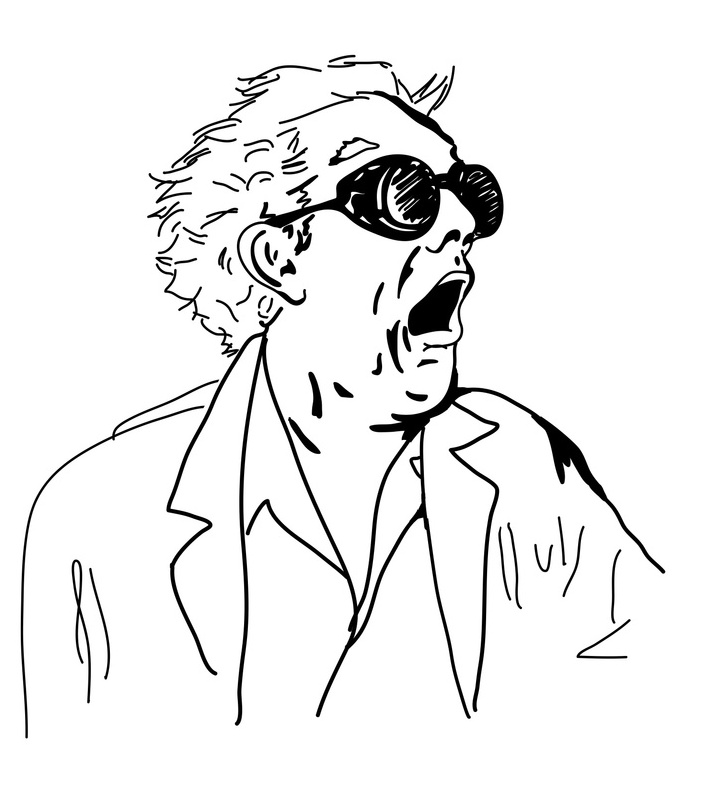 From my data, there is no user interest in being able to alter the past. However, many mentioned they would like to be able to travel back to re-live significant memories and other historical events.

My Idea of Time Travel

I created sketches of the user flow through the app, as well as initial concepts for the different screens of the app. These changed a little as I brainstormed and fleshed out my ideas. 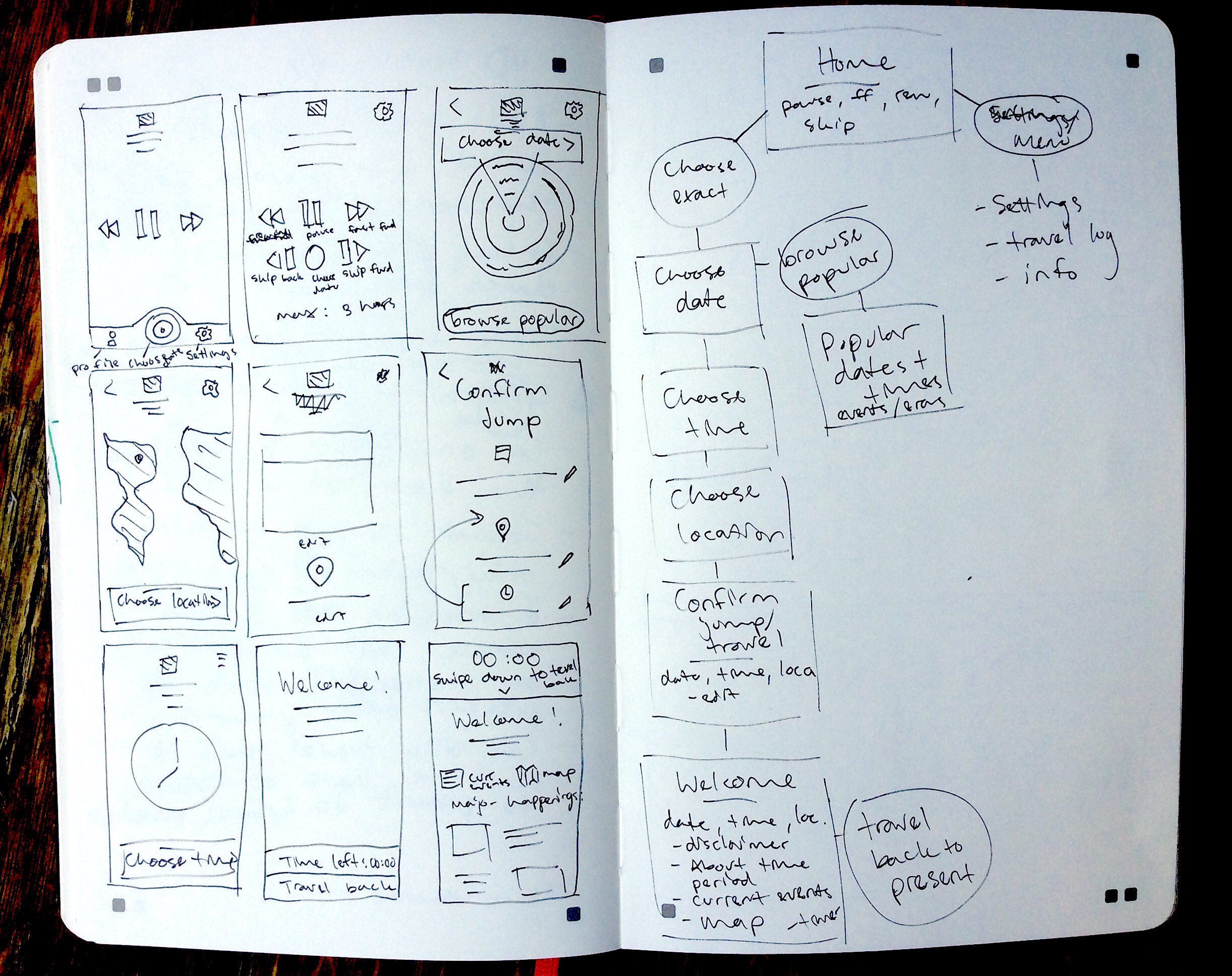 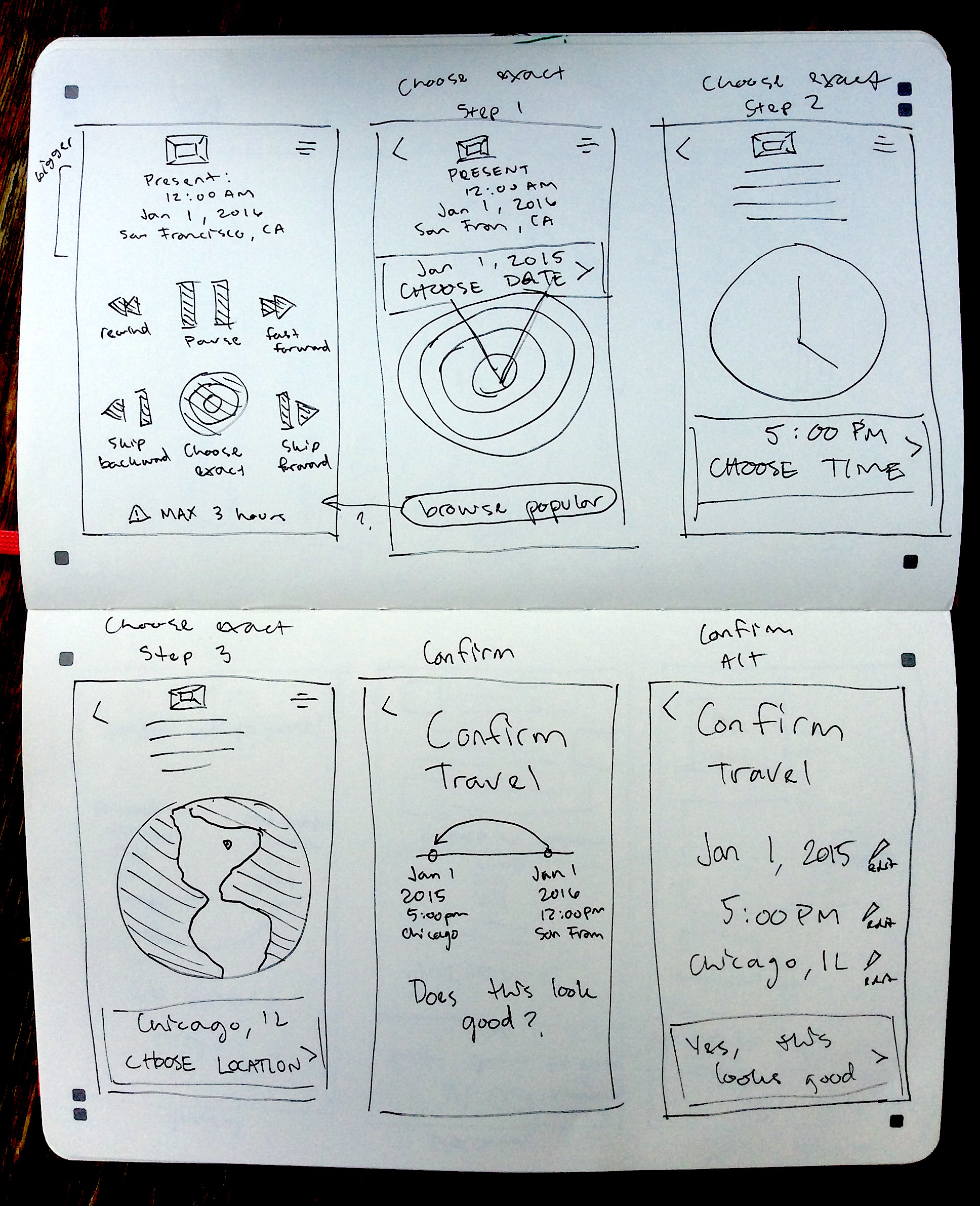 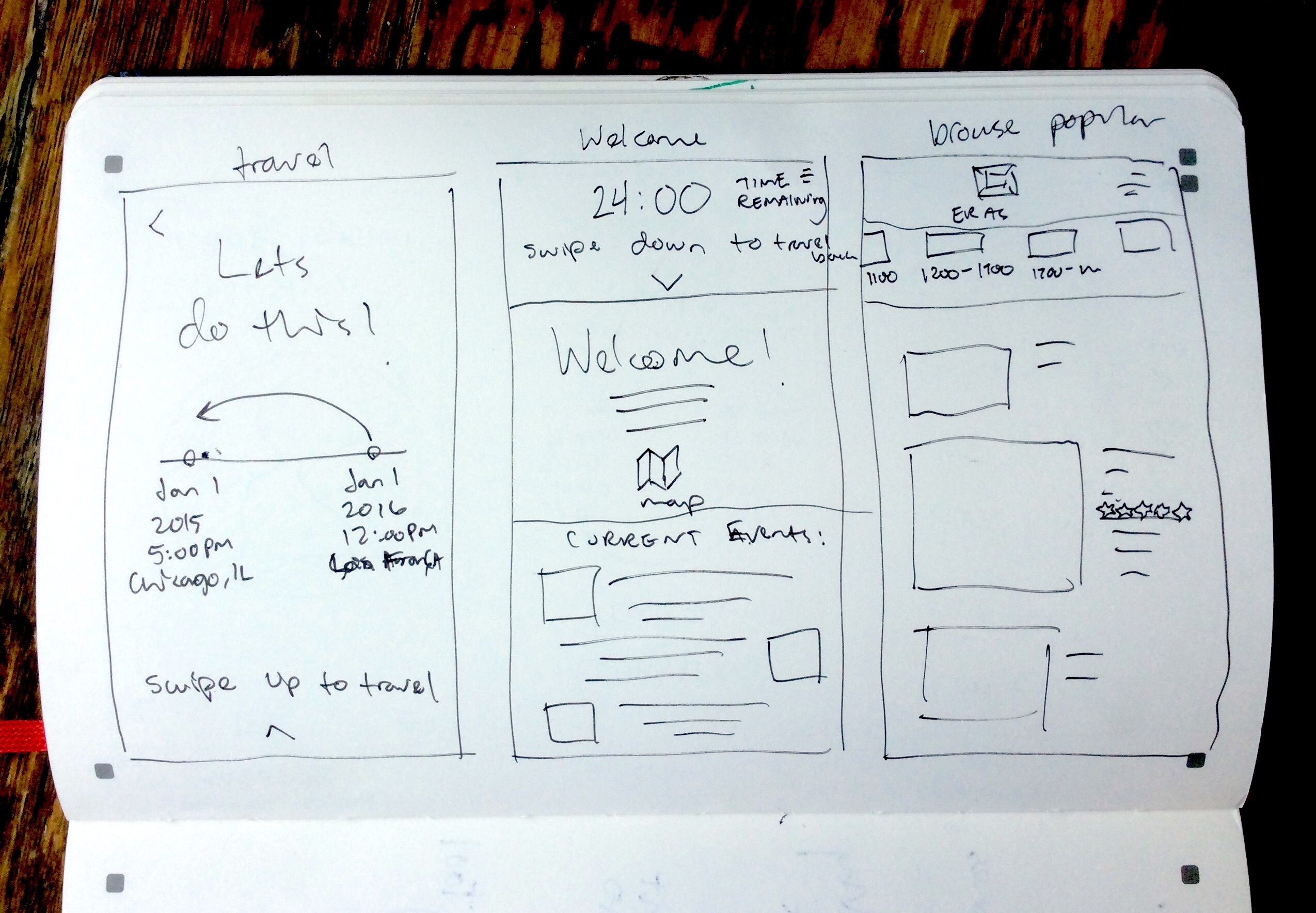 Putting it All Together

I created screen mockups in Adobe Illustrator, changing some of the screens from my original ideas as I worked. The final mockups were strung together with Adobe Experience Design and can be clicked through below. 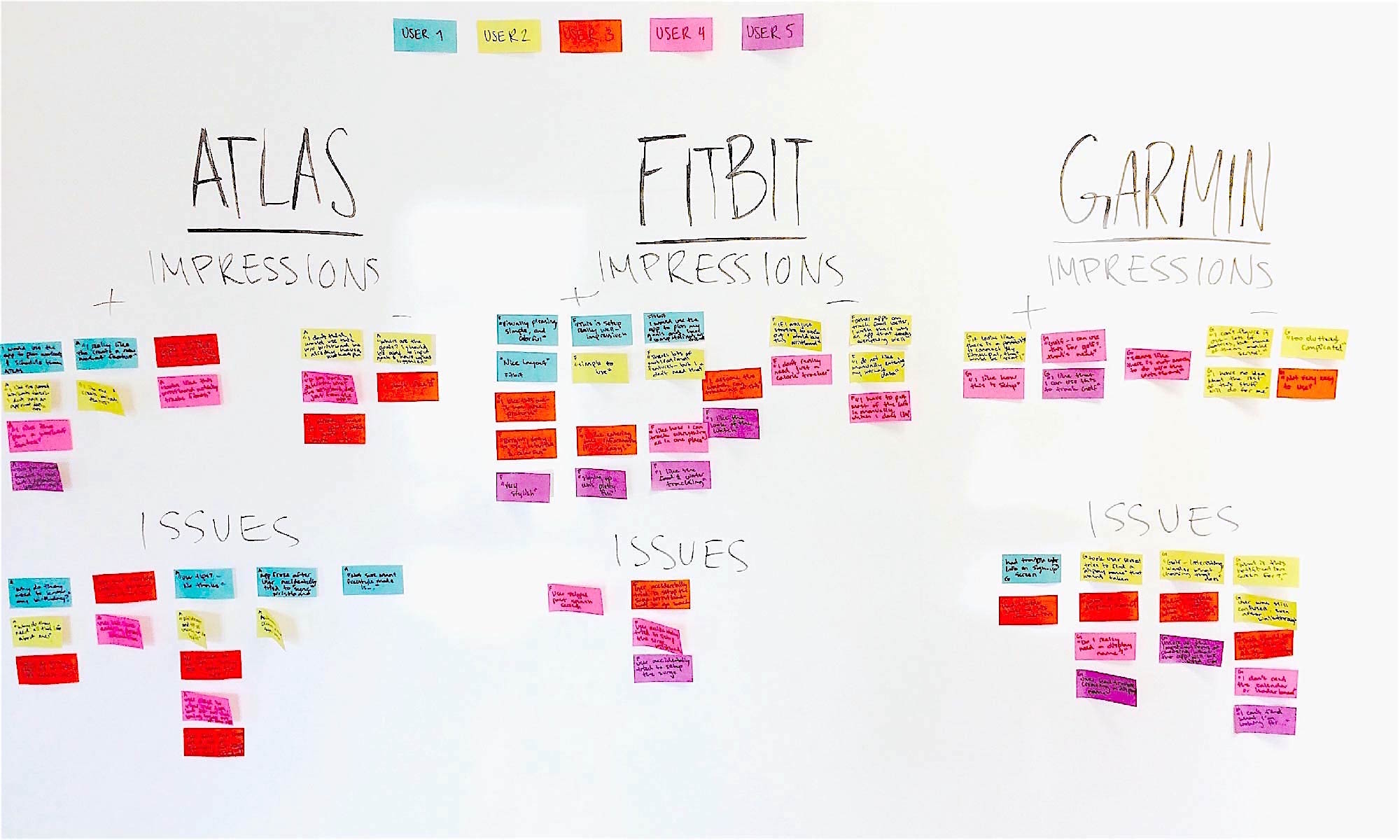